Barnsley Civic Trust is an independent, non political, voluntary organisation made up of people who live, work or have a business in Barnsley.

Barnsley Civic Trust has suspended its schedule of committee and other meetings as a result of the escalation in the Covid-19 virus situation and the strengthened advice from central government.

We will stay in touch online and continue to comment on local issues and developments and plan for future activities.

Helping and supporting each other at this difficult time is really important. We look forward to the time when the emergency has passed.

Information will be made available on our website and via social media, as well as by email to our members.

The Barnsley Civic Trust’s executive committee met this last week to discuss future events and activities. We noted the initial feedback on the Retail Awards and the Presentation Event. Lots of positive comments – and thanks to Phyllis and Rebecca for their hard work in organising the Retail Awards scheme this year.

A short annual general meeting will take place at 7pm on Tuesday 11 June 2019. It will last about half an hour. Nominations are welcome to join the executive committee – please contact the secretary for a form. Refreshments will be available from 6.30pm.

The main part of the evening will be an illustrated talk by Stuart Currie of the Tasker Trust on the historic streets of the town, the significant buildings sadly lost in the changes which have taken place over  the last 100 years and the buildings which we really should ensure do not disappear in the future. An important role for Barnsley Civic Trust.

Good to know that the two Barnsley Civic Trust blue plaques started the trail in 2012; now augmented by the red plaques of the trail

Barnsley Civic Trust has arranged its next social event on Tuesday 18 December: dining at One Momento in Peel Street. Book a place through Phyllis Barnes or Rebecca Battye. 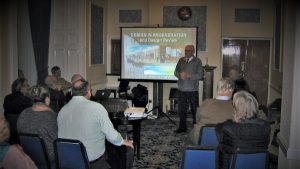 Tom Lonsdale gave an interesting and informative talk on Design in Regeneration and the work of the  Barnsley Design Panel; members of Barnsley Civic Trust were joined by others interested in the topic at a recent meeting.  Tom, the chair of the Design Panel, covered a wide range of aspects of design and some of the major schemes in the town centre.

A decision on the planning application for the new ‘iconic’ foot bridge to replace the town centre railway crossing was made on Wednesday 24 October.

Jumble Lane crossing is due to be closed by Network Rail in March 2019 with a temporary bridge in place.

At a recent meeting of Barnsley Civic Trust, Sarah McHale from Barnsley Council told us that the new permanent bridge is designed by Renato Benedetti (Benadetti Architects) who also designed the new bridge in Castleford. The structure cost is estimated at £5m with £2m from Network Rail and £3m from BMBC.

The bridge will be ‘stunningly’ lit at night and the bridge deck is a 1.8 meter deep steel channel wide enough to cope with large flows on match days.

It has to be high enough for electrification and wide enough for platform extension in case these are planned in the future.

The main points raised at the Barnsley Civic Trust meeting were the nature of the deck and not being able to see out of it, the nature of fencing to the railway (Network Rail insisting on palisade), and the look of the canopy to the ‘funicular’ lift at either side of the bridge for people with disabilities and pushchairs etc.

The meeting, however, liked the bridge and thought that it has come a long way from its first incarnation.

Barnsley Civic Trust conveyed these views to the council and in addition we commented that it appears from the positioning of the ‘funicular lift’ on the opposite sides of the bridge at both ends that people in wheel chairs and cyclist will have to cross from one side of the bridge to the other, cutting across the route that everyone else will take. This can’t be right, can it?

On Thursday 7 June at 6.30pm at the Hope House Church Hall on Blucher Street, S70 1AP