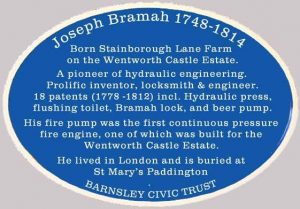 ‘Blue plaques’ are put up to recognise a building or place’s connection with a significant person from Barnsley or with an event in the history of Barnsley.

The person might be a prominent individual in the history of the borough or someone whose achievements are more widely known. By agreeing a Blue Plaque, we celebrate these people – the Best of Barnsley – and what they have achieved.

Some Blue Plaques have also been erected to commemorate events which took place at the location rather than the people who lived, worked or studied there.

Locke Park, Barnsley.
This park was donated to the town in memory of Joseph Locke, railway engineer, 1805-1860, who was raised in Barnsley.
[Barnsley’s Heritage]

Warner Gothard. Regent Street South, Barnsley.
These shops and offices were erected in 1927 by Warner Gothard, Barnsley photographer, 1865-1940, pioneer of the montage postcard. He donated Seckar Wood for the benefit of the people of Barnsley and Wakefield. [2009]

Barnsley Synagogue. 82 Castlereagh Street, Barnsley.
This plaque was erected to commemorate this house being used as a Synagogue for the Barnsley Jewish Community from 1903 to 1946. [2018]

This site uses Akismet to reduce spam. Learn how your comment data is processed.